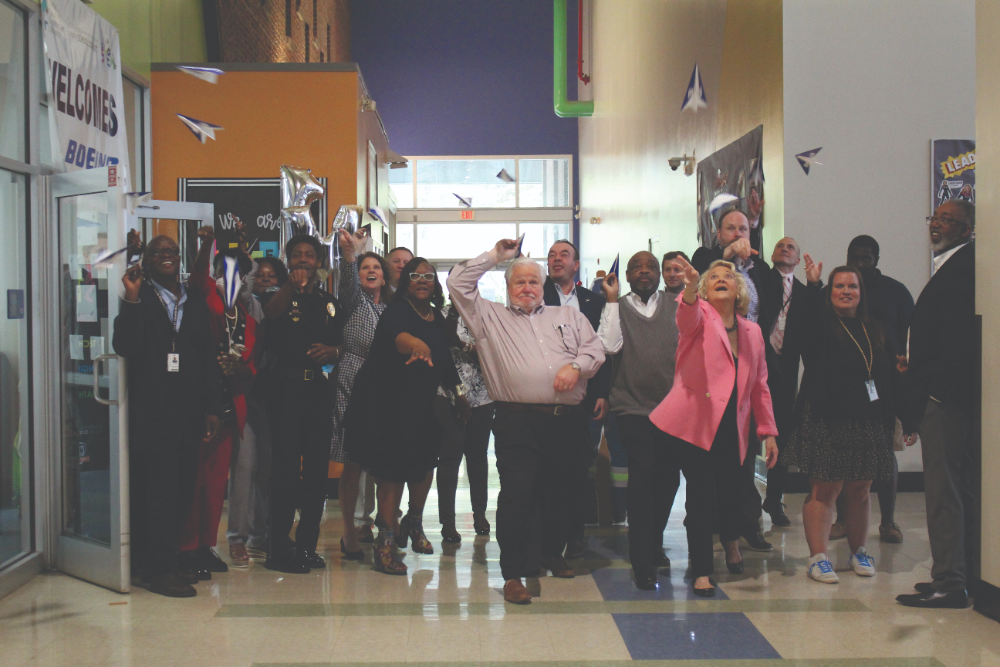 These conversations are facilitated through Boeing South Carolina’s DreamLearners educational program, which celebrated one million participants this month.

“STEM education unlocks tomorrow’s innovations, encouraging breakthroughs and advancements we can’t even imagine today,” said Ziad Ojakli, executive vice president of government operations at Boeing, who attended the event. “Boeing celebrates the inspiration and sense of accomplishment STEM programs can bring to young minds, and we are proud to champion a unique program like DreamLearners.”

DreamLearners began in 2012 as a STEM-based instructional program that educates students about Boeing’s presence in the state, as well as about advanced manufacturing and aerospace. While students of all ages can take part in the educational offerings, the program also meets the Force and Motion standards for fifth-grade classes in the state of South Carolina.

Participants of DreamLearners get the chance to contribute to group activities while learning more about different careers at Boeing and the benefits of a STEM-focused education through speaker events and tours of Boeing facilities.

In response to the COVID-19 pandemic, the program also added a virtual learning component in 2020, which has expanded its reach to all 46 counties in South Carolina and beyond.

At Boeing’s one-millionth student celebration, fifth-grade classes were able to sit alongside elected officials and representatives from Boeing and the school district to participate in a paper-plane-folding activity. Individuals had the opportunity to try to fold the best plane and to make it soar the furthest down the school hallways. 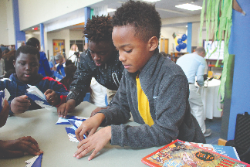 For 10-year-old Tae-Sean Miller, this is the fuel behind his future ambitions as an engineer who builds rockets.

“We got to go to a military base; we got to learn about robotics and programming machines, and about the inside of how to build planes,” Miller said. “When you have the small pieces and you put them together, it’s just so satisfying.”

While at the April 6 event, other students chatted excitedly about additional program offerings, like learning to code an avatar, building drones and taking plane rides with the Tuskegee airmen.

Eleven-year-old Shaniya Howell wants to become an artist when she grows up, and found she really enjoyed learning about airplane parts because her grandmother works at Boeing.

“It’s just interesting to know what kinds of materials they use to not drag the planes down because I like the science behind it,” she said.

Since the program’s inception 10 years ago, more than 7,600 teammates have volunteered at almost 4,000 education-related engagements.

“Volunteering with DreamLearners means having the opportunity to sow seeds of aspiration in the minds of the future youth,” said Tiffania Ham Fayall, a Boeing South Carolina Quality teammate and DreamLearners volunteer. “I believe through community service I can connect with at least one child, teen or adult, sharing the importance of STEM education and desired skills needed in careers.”

Boeing has also partnered with the S.C. Department of Commerce and its Regional Workforce Advisors, who help coordinate Boeing’s grassroots outreach efforts across the state. As part of the Boeing Days initiative, the DreamLearners program visits schools in every county throughout the year.

With its close proximity to Boeing South Carolina’s Airport Campus, North Charleston Elementary School has been a key partner in hosting DreamLearners engagements for several years. The school is also part of the Liberty Hill STEM Collaborative, an initiative supported by Boeing, Charleston County School District, Coastal Community Foundation and the Charity Foundation, which aims to prepare students for jobs in the local aerospace industry