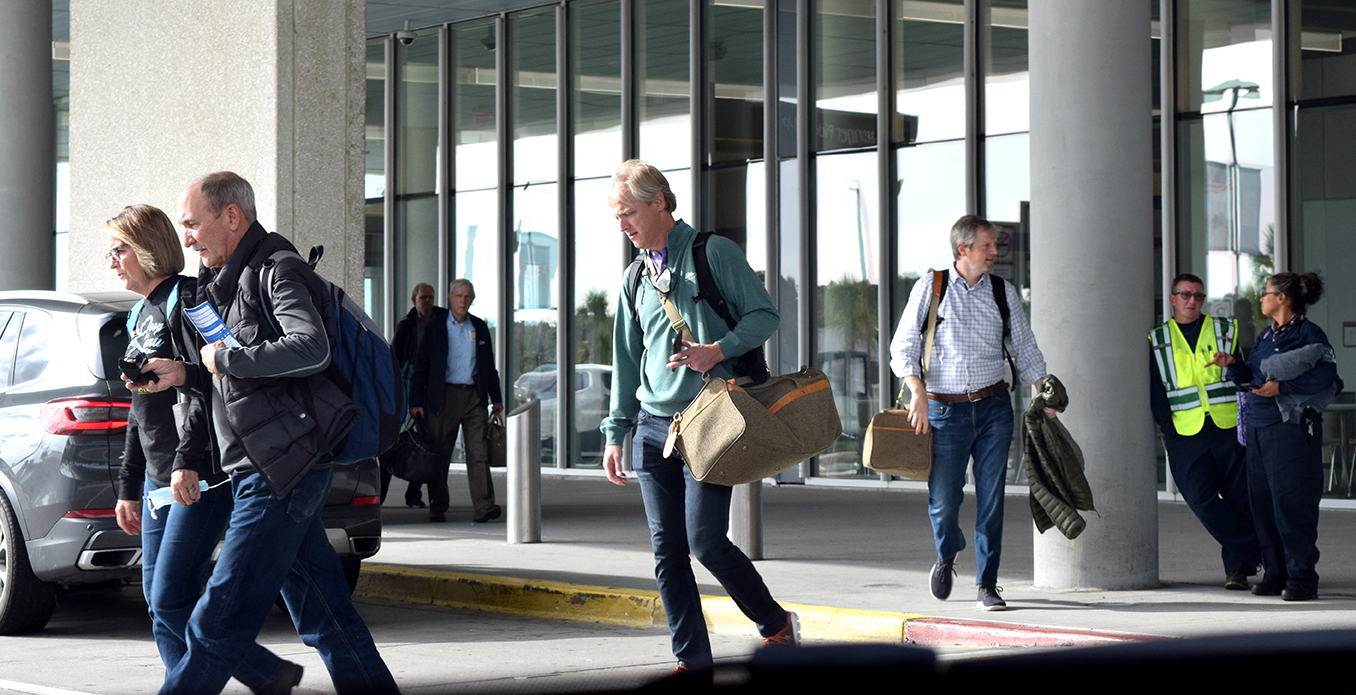 The pandemic may have halted the region’s economy for a few months, but some industries are bouncing back harder than ever.

The port has seen a record eight months of cargo volume, furniture is up 55% as a commodity, and the Charleston International Airport is predicting its best year ever after five months into the fiscal year.

The bar was set higher for the airport in 2019 when more than 5 million passengers came and went from Charleston’s airport.

“With 2019, everybody talks about it like it’s Christmas morning… but the thing about bars is you want to get over them,” Charleston County Aviation Authority Executive Director and CEO Elliott Summey said at the Nov. 18 board meeting.

Within the past few weeks, the airport has filled 29 of 40 vacancies, a significant amount considering the airport is a team of 190, Summey said. In mid-November, the airport also returned to an A+ credit rating from Standard & Poor’s after Charleston, along with every U.S. airport, was downgraded during the pandemic.

“We were one of the first airports in the country to get upgraded. That says a lot,” Summey said. “Again, we’re small but mighty.”

That rating will help the airport borrow money on the bond market, Summey said.

The airport’s numbers are trending with higher revenue and lower expenses for fiscal year 2022. Increased revenue comes from a 287% parking increase year-over-year, and a 24% increase over 2019, thanks to completion of the new parking garage.

Concessions also are up 2% since 2019, with companies like Cinnabon coming in and more changes slated for January.

Enplanements are up when compared to summer 2019 versus summer 2021, and show a trend that post-summer travel isn’t dropping off like it has in the past.

Bookings are holding just as steady through the holidays.

“You’re seeing a stabilization in our enplanements into the fall,” Summey said. “I think you’ll see it in the Charleston market as well, in hotels and business travel and in the economy.… There isn’t an off-season in Charleston anymore.”

With the new parking garage built and in use, the airport’s next major project will be a new concourse C that could be completed in 2026 at the earliest.

But in the meantime, the Aviation Authority needs to figure out how to handle the passenger growth with the infrastructure already in place — and without downgrading the customer experience, Summey said.

To provide solutions, the agency has called on aviation planner and consultant Mark Ahasic, president of Ahasic Aviation Advisors, who presented at the meeting. The Connecticut-native previously helped JetBlue build its John F. Kennedy Airport terminal and has spent the last two months working with the Charleston operations team to find ways to change the paradigm of growth.

Ahasic said he’s looking for “quick wins,” for capacity enhancements that can be completed in the next five years because airlines continue to knock on Charleston’s door, wanting to begin providing service to the region.

At the airport’s advantage is its common-use computer technologies that allow any airline to use any gate. Charleston also owns all 15 gates, unlike other U.S. airports that offer gates to carriers on long-term leases.

In Charleston, however, airlines have come to operate over time as if the gates are their own; passengers flying JetBlue, know they’re going to gate B6 or B8 or for Southwest to B2 or B4.

But technically, those airports don’t have a right to claim those gates. If an airline has two early morning flights and then a 6 p.m. flight, a gate is sitting empty for hours and could be up for grabs.

To make the most of gate capacity, Ahasic suggested the airport adopt a more common-use model. The Authority could then attract new carriers, new flights and bigger aircraft with the space, and at the end of the day, provide better customer services.

If Charleston were to take on the common-use model, which currently only two of the 15 gates operate under, the airport could potentially see 49 more departures in a single day.

“What this does is for the first time, this gives sales folks who are actually out talking to the airlines saying what we do, it gives them opportunity to show how big we can blow the balloon,” Summey said.

The volume could translate into an additional 3.3 million annual passengers.

The airport has the capacity and the legal ability to pull the trigger, Ahasic said.

“But what needs to be done in order to flip that switch is to sit down and develop operational protocols and a program, a concept of operations to basically have the authority to take over the allocation of the gates so that you would be managing the gates, you would be assigning the airlines to the gates and obviously maximizing utilization and getting the most capacity that you can,” Ahasic said.

Right now, the airport is leaving capacity on the table because gate usage is all over the place, he added.

Space, however, is limited at the airport with peak time passengers already elbow to elbow, Summey said.

If more flights are brought in, another opportunity Ahasic explored is whether there’s potential to add more gates to the airport with bigger waiting spaces, or even rooftop gathering spots, using existing space until concourse C is constructed.

The CHS layout has two concourses, A and B, with five and 10 jet bridge gates at each, respectively. There’s also parking positions to the east and west of the airport that are not used for airline passenger operations.

Ahasic looked at adding fixed links, or connection tunnels linking a terminal with a gate house, that could safely lead passengers to more gates temporarily added to the parking positions. A permanent gate extension could cost upward of $10 million, but modular extensions are inexpensive comparatively and also are temporary.

With more space, enplanement costs would go down, airline revenue would go up and more carriers would come, Summey said.

Breeze Airway’s success after launching in the Lowcountry in May is proof that an airline can start a business in Charleston and thrive, Summey said. Despite a slight scale back in August, the airline has added new connections, sold out flights and seen 100% employee growth.

If the proposed plans are implemented, Ahasic suggested phasing them in incrementally and flexibly, with the common-use model first, then possibly adding a bridge with three gates off concourse A and one off concourse B to start.

While studies have to be performed and technology plans have to be placed, among other details, Summey is optimistic about the potential.

“The worst thing you can do in business is not capture opportunities, right? And if we have to wait until 2026, we’re gonna lose opportunity,” Summey said. “The opportunity is here, and it’s now.”