Signs reading “Same pay and benefits ‘Coast to Coast’” and “A contract is better than a promise” were held high by attendees at a pro-union rally Monday afternoon at the Crowne Plaza Hotel in North Charleston leading up to the unionization vote Wednesday at Boeing South Carolina.

About 100 Boeing employees, union representatives and community leaders cheered the speakers as they talked about worker rights. Members of the International Longshoremen's Association Local 1422 showed their support with ILA signs. Some Boeing workers let anger about management spill out in comments muttered under their breath. Many stood quietly in the back. Journalists with cameras flanked the sides of the room. 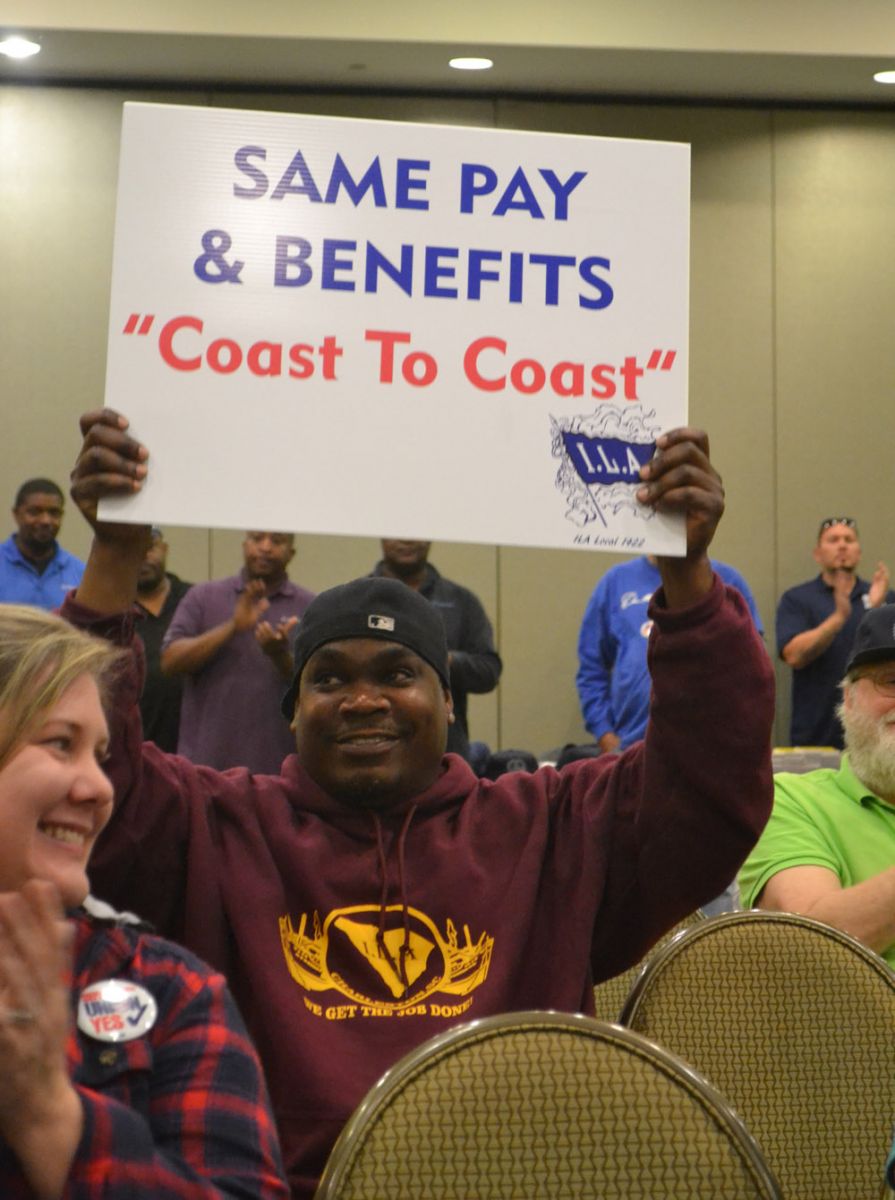 About 3,000 Boeing S.C. production workers are eligible to vote in the election, which will determine whether the facility workers will be represented by the International Association of Machinists and Aerospace Workers.

Mike Evans, the lead S.C. organizer for the union, pushed themes of respect, better wages and consistency in work rules and schedules.

“You’re not sharing in the same success that you’re creating for Boeing. ... This is a wealthy industry; your labor allows a lot of people to get rich,” Evans said. “But that success is not reaching the shop floor here at BSC.”

Boeing reportedly held an all-company meeting earlier in the day, ahead of the union rally. Site leader Joan Robinson-Berry and Boeing Executive Vice President Kevin McAllister spoke to workers about the benefits of remaining union-free, according to several Boeing employees.

Boeing leaders told workers that the union would interfere with their ability to collaborate on projects and that the S.C. site has achieved success without the IAM.

“Our team has achieved an impressive list of amazing and historic accomplishments here in South Carolina in a remarkably short period of time, without the IAM,” Robinson-Berry said in a statement.

Pro-union Boeing workers say they feel disenfranchised and taken advantage of by the corporation; they see the union as their champion for better wages and benefits.

One Boeing S.C. employee, who relocated from New York to work in composite manufacturing at the North Charleston facility, said he wants the plant to become unionized, in hopes of earning higher wages.

“People are not used to decent-paying jobs here,” said the worker, who verified employment with a badge but asked to remain anonymous. “A lot of people in South Carolina haven’t had the opportunity to make this kind of money before, so maybe they don’t feel like they have the self-worth to ask for higher wages; but we are not being paid equally for the product we build compared to Washington state workers who do the same work.”

Anti-union Boeing workers say the union is an interfering entity trying to make money off workers through dues while taking away from the North Charleston site’s success in a union-free environment.

The opposing viewpoints sometimes lead to heated debates and divisiveness on the shop floor, three employees said. But often it’s a nonissue.

Both Boeing and the IAM are digging in their heels and digging into their pocketbooks leading up to Wednesday’s election, as pro- and anti-union advertisements have blanketed the Lowcountry.

Unionization of one of the largest manufacturing facilities in South Carolina would be a shock in a red state that typically has a strong anti-union stance. South Carolina now has the lowest unionization rate in the country ­— with 2.1% of the state’s workforce unionized in 2015, down from 2.2% in 2014, according to the latest data from the Bureau of Labor Statistics.

Many politicians, including former Gov. Nikki Haley, have been openly hostile to the idea of unions planting roots in South Carolina.

Rep. David Mack, D-Charleston, however, supports unionization of the Boeing plant to buoy wages and benefits for Lowcountry aerospace workers.

Boeing leaders have said the union will make money off workers’ dues while making promises it cannot necessarily keep, depending on how negotiations go.

“The IAM has made a lot of empty promises in this campaign, in an attempt to get votes,” Boeing spokeswoman Elizabeth Merida said in an email. “The union wants teammates to believe that they will get Seattle wages in South Carolina, but in reality, the IAM negotiates pay based on the region. ... No matter what the IAM claims, the truth is that pay and benefits are open to negotiation in the collective bargaining process. Wages and benefits can stay the same, go up, or go down. There are no guarantees.”

Robinson-Berry said the IAM does not have workers’ best interests in mind. She has said the union interferes with an open work environment.

“One of the great things about Boeing South Carolina is that our teammates already have a voice, and their ideas, concerns and feedback have driven many changes for the better, and continue to do so today,” Robinson-Berry said.

Polls close around 4 p.m. Wednesday. Results are expected around 7 or 8 p.m. that night.

Two days after the vote, Boeing plans to roll out the first-ever 787-10 Dreamliner on Friday, and President Donald Trump is expected to be in attendance, according to company officials.